crossMining is an Across component that statistically analyzes the contents of crossTank and crossTerm entries for correlations between the source and target languages. crossMining automatically determines matching words in the translation units of a bilingual translation memory (e.g. English engine and German motor).

One of the intermediate results of the crossMining work is a statistical lexicon that can be used at various points within Across e.g. in order to expand the termbase or to assist the translator in his work.

In this regard, the following two crossMining functions are of interest:

In addition to the normal monolingual term extraction in Across with downstream term translation, crossMining additionally enables bilingual term extraction of pairs of term candidates: In addition to the source-language term candidates, the probable target-language equivalents are also proposed. The terminologist can select the desired term pairs. Subsequently, the term pairs are automatically sent to crossTerm, where they are added in new terminology entries. 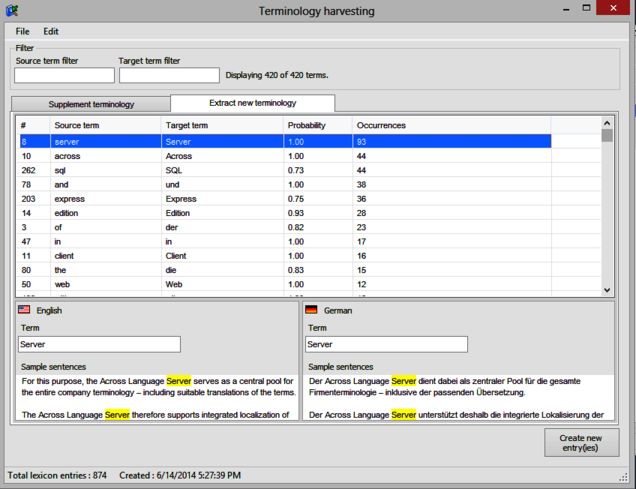 It is possible to expand existing termbases with target-language equivalents in an additional language. If, for example, English equivalents are to be added to an existing German termbase, crossMining automatically extracts possible English translations and proposes these to the terminologist. The terminologist can select the desired target terms which are sent to crossTerm and added to the corresponding source-language term(s).