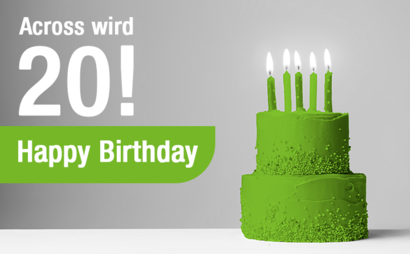 20 years of expertise in translation management

Across Systems GmbH is celebrating its 20th birthday. The first lines of code for today’s Across Language Server were written in 2000. Since then, the company has grown into one of the leading suppliers of translation management systems. Some 25,000 customers worldwide rely on Across today, with a large portion of them coming from the German-speaking world. They benefit from the high-quality, safety, and performance of the Language Server, along with the comprehensive know-how of Across Systems. To commemorate this year’s anniversary, Across is doing something for the environment by supporting the reforestation and revitalization of a meadow orchard in the company’s home region on the edge of the Black Forest.

“We are very proud of our anniversary this year and would like to extend our thanks to our customers, partners, and employees for the trust they have placed in us,” says Gerd Janiszewski, CEO of Across Systems GmbH. “Over the past 20 years, we have been able to build up comprehensive expertise in the field of translation management, which we contribute to further development of our business every day.”

From spin-off to global provider

Across Systems had its genesis in Nero AG, an established provider of multimedia software. Nero faced the challenge of translating its manuals in 2000. As the team responsible for the project could not find a suitable product for managing the translations, they decided to take the plunge and develop such a solution themselves, thus laying the foundation for today’s Across Language Server.

Success was not long in coming. It quickly became clear what potential the translation management software had, leading to the founding of Across Systems GmbH as an independent company in 2005. Since then, more and more features have been added to the software, a broad network of partners has been established, and investments have been made in increasing use of the software internationally.

In 2016, Gerd Janiszewski took over as CEO of Across Systems and further expanded the company’s market position while tapping into new business areas. As of today, version 7 of the Across Language Server is one of the leading software platforms for all language resources and translation processes in companies. Just like when it was first starting out, Across uses its expertise and a personal touch to help its customers make their translation processes secure and efficient.

Check out the anniversary message of Across.

Here's how it works: Download an RSS reader and then subscribe to the RSS feed. In this way you'll always be up to date.