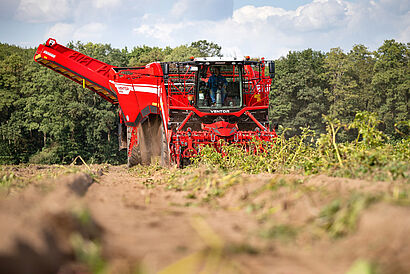 Increasing Translation Volume and Reducing Costs with DeepL and Across

“We save €8000 per year on the translation of our in-house employee magazine alone!”

“When we began using Across at GRIMME in 2012, what we now refer to as our ‘corporate language’ was still in its infancy, of course,” says Michael Klindtworth, who is responsible for Translation Management at GRIMME. “While terminology already existed, it was not used consistently in the technical documentation and certainly not finding its way into the international brochures. What good is top-notch engineering if we aren’t able to explain our machines to the customers in a way that they understand? The answer to this question was reason enough for us to consider creating an in-house database for terminology and translation management that could then also be used to automate our translation processes. Across was able to map all of these requirements in a software package.

Almost 10 years after GRIMME began to use Across, 34 languages have been added to the company’s Across installation. The website of the agricultural machinery factory is maintained in 8 languages, and there is an online configurator in which around 120 machine series are described in detail in 12 languages – and the number of languages supported is growing all the time!

“It’s important to make colleagues aware of translation issues as well as the cost of translation. High-quality documentation is simply part of a premium machine today,” Klindtworth explains. “We have since managed to ensure that all machine parts are referred to using the same terms, from the initial prototype design to the spare parts for used machines. We use these distinctive terms to specify the components and functions in a standardized manner throughout the organization and in our interactions with customers. Our development engineers are supported in doing so through the use of crossTerm on the company intranet. Our IT department has even written software that allows us to use the terminology in order to develop the electrical circuit diagrams. Most people don’t realize how much money and time we save by standardizing and reusing language as well as by automating our translation management processes. It’s actually the same idea as reusing the same components in different machines – a principle familiar to every mechanical engineer.”

The most recent project for further development of Across at GRIMME was the integration of DeepL as a new component in the existing translation process.

GRIMME would have preferred to purchase an MT engine (that is, a machine translation program that uses artificial intelligence) that can be taught the language contained in GRIMME’s crossTank. Unfortunately, offers for such engines have not been sufficiently attractive so far. This led the company to make the decision to purchase a low-cost “DeepL Pro advanced” license about a year ago. Since DeepL basically translates generically (that is, translating each sentence one at a time, isolated from what came before), the translations it produces contradict our corporate philosophy of using language that is as uniform as possible.

We therefore prefer to use DeepL for texts that are NOT shared with the end customer and whose reuse in other texts is not to be expected. An example of this would be the employee magazine. Despite the limitations, we are able to save approximately €15,000 to €20,000 annually.

Across Support was able to seamlessly integrate the new machine translation. Using DeepL as an integral component of Across has many advantages in day-to-day business, with the most important benefit certainly being the translation speed. However, the weaknesses of DeepL also make themselves known in short order in the form of mishandled names, use of British units of measurements, and inconsistent translations. When it comes to giving colleagues a “quick-and-dirty” translation so that they can gain a rough understanding, DeepL does a perfect job without much effort. And with a little post-editing, the output can be transformed into a usable document!

A prime example of good use of DeepL is the translation of the employee magazine, which is published for all branch offices and subsidiaries two to three times a year. The magazine contains more than 15,000 words across roughly 30 to 40 pages. The articles are authored in-house and laid out by GRIMME’s in-house agency using Adobe InDesign®. The texts are translated once and need to be understandable to the employees. The usual technical terms from agricultural engineering are not or only rarely used.

This translation was carried out by GRIMME employees themselves in the past, a process that was both costly and time-consuming. If the document was sent out to be translated externally, costs of roughly €3000 per issue would have been incurred, along with expenses for layout and the like.
Since the integration of DeepL into Across, it has been possible to quickly machine-translate the employee magazine and then correct the text in a post-editing step. This was not possible in the DeepL web application due to the file formats involved. Instead of the 14 days it used to take for translation and proofreading, the text was revised within a day.

Due to the integration of DeepL into Across, it is also possible to seamlessly process IDML files. The document is laid out in Adobe InDesign®. For purposes of translation, the designers export an IDML file, which is then processed with Across. In addition to the IDML file, a PDF file for viewing the layout is included in the translation project. On this basis, the proofreader can always check the source document to see everything in context.

Unlike the web application, which does not have the capability of processing IDML files, Across has no problems working with such files to integrate the DeepL translation. In addition, Across allows the proofreader to consult the company’s own German terminology during the post-editing process. “Unfortunately, the available translations of the terminology are still ignored so far, since the machine translation process is generic. With the DeepL version integrated in Across, it is still not possible to store terminology lists,” says Michael Klindtworth, commenting on the current state of the art. An exception to this are 100% matches, which are imported directly into the translation from crossTank, the translation memory in Across. For example, if slogans from advertising campaigns are reused as headlines for the employee magazine, the existing translations come from crossTank and not from the generic Internet translation. This is a feature that significantly reduces the number of corrections necessary.

Get Case Study by E-mail